Energy can neither be created nor destroyed.

This concept was established be Einstein’s equation E=MC2 and has been confirmed by numerous experiments. Therefore Energy has always existed and will always exist, this means our current concept of time where everything has a beginning and an end is false. If we follow this line of reasoning it should be obvious that any scientific theory that describes the origins of the universe is not actually describing the origin of energy but rather one particular expression of that energy.

Bread and Circuses is a term that comes from our Ancient Roman ancestors. It has been used over time to describe the tactics leaders use to keep the public distracted from what’s really going on.

END_OF_DOCUMENT_TOKEN_TO_BE_REPLACED

“Coincidences are glimpses in to the creative mind of the universe.” – Deepak Chopra

Everyone experiences coincidences, but we often write it off as that, nothing more. Dr. Deepak Chopra however, believes it is very important that we start paying more attention to them. According to Deepak, The Power of Recognizing Coincidence can dramatically transform your life.
END_OF_DOCUMENT_TOKEN_TO_BE_REPLACED 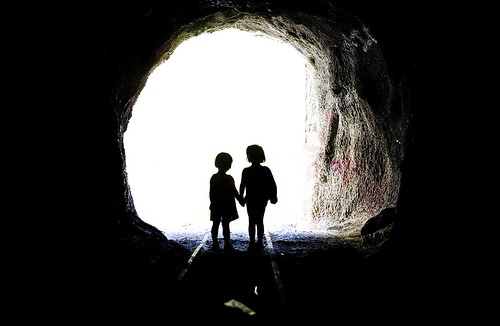 Plato’s Cave is a philosophical allegory that questions our beliefs on Reality. What is Real? What is True? Is our world just Shadows on a wall?

The allegory of the cave comes from Greek philosopher Plato in his work The Republic to illustrate man and our perception of what we hold to be real. In true philosophical fashion the concept is presented in a simple conversation Socrates (Plato’s Apprentice) has with Plato’s Brother Glaucon.

END_OF_DOCUMENT_TOKEN_TO_BE_REPLACED

Color is an illusion.
Color as we know it, does not exist in the outside world beyond us, like gravity or protons do. Instead Color is created inside our head. Our brain converts a certain range of the electro-magnetic spectrum into Color. Now you can measure the wavelength of radiation to determine what color is being displayed, however you can’t measure, or observe the experience of a color inside another person’s mind. This begs the question, Is your red the same as my red? END_OF_DOCUMENT_TOKEN_TO_BE_REPLACED

Warning: This article will sound like complete bullshit to the conservative mind. If you can go into the reading with an open mind and are willing to try the methods described with the intention of attracting good things to your life, please proceed. However, if you are already swaying towards skepticism, please save this article for a time when you are dying for a change or confident that this method could work for you. This might be the most important and eye-opening article you will read in your entire life so plan accordingly. Thank you END_OF_DOCUMENT_TOKEN_TO_BE_REPLACED

Traditionally, science has dismissed the soul as an object of human belief, or reduced it to a psychological concept that shapes our cognition of the observable natural world. But new understandings of consciousness have challenged this claim. According to the theory, consciousness is derived from microtubules within brain cells (neurons) that are sites of quantum processing. According to Dr. Hameroff of the University of Arizona and British physicist Sir Roger Penrosen, when the heart stops beating, the blood stops flowing, and the microtubules lose their quantum state, the quantum information in the microtubules isn’t destroyed. So could this explain near-death experiences, or the idea of our consciousness being eternal?:
END_OF_DOCUMENT_TOKEN_TO_BE_REPLACED